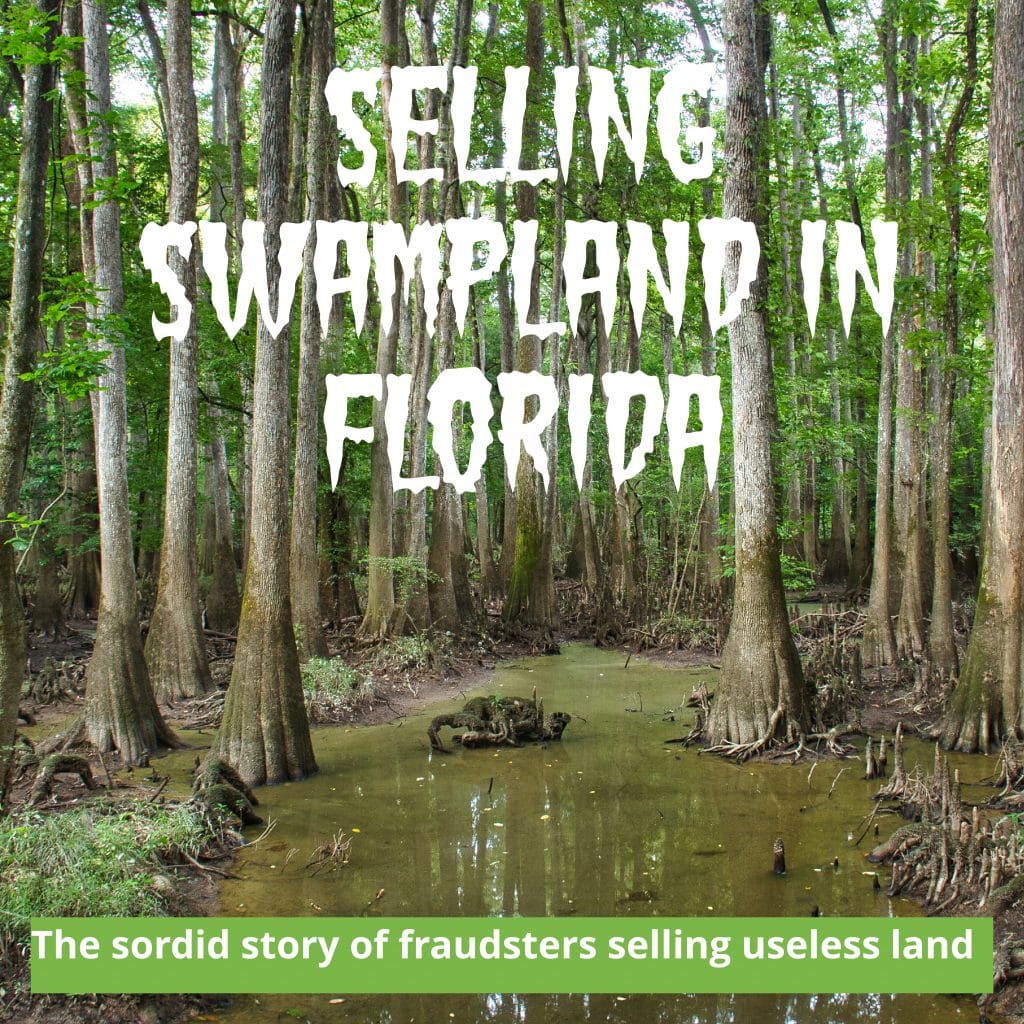 Have you ever heard the phrase “I’ll sell you some swampland in Florida”? The origin story of that phrase is one of real estate speculation salted with some intended fraud. Millions of years of ago, Florida was under water. There are no dinosaur fossils found in Florida because they never roamed our underwater state. According to a United States Coast Guard report, 11.4 million acres of land comprising 29% of the state are wetlands. Much of those lands have been safeguarded and protected by state and federal parks, land grants and preservation. Many other areas are owned privately but can never be developed. High water tables and constant flooding prevent areas from being developed. Additionally, it’s impossible to build support utilities like roads, sewers and power lines. That’s where the fraudsters come in. They scoop up near worthless land and peddle it to unsuspecting buyers with a dream of a developing tropical oasis. These “paper subdivisions” have the necessary smoke and mirrors to seem legitimate, but that’s all they are – paper. Plans are drawn up and paperwork filed to cover the tracks, but “developers” are not unaware that they are creating a fantasy that will never come to fruition.

Over 100 years ago with the installation of the railroad along the East Coast of Florida, came wild speculations about the “tropical paradise” of Miami and the millions to be made in land sales and development. Additionally fueled by the affluent being cut off from Europe due to World War I and desiring a southern retreat, Miami and South Florida became a beacon for speculative buyers, respite seekers and swindlers. Lots could be sold at auction multiple times a day; but, a day of reckoning was coming for the 1920s housing boom in Florida. Railroad embargoes and hurricanes stifled the growth and turned the dream into reality. By the time the Great Depression began, the real estate boom in Florida had run its course.

Fast forward to the 1960s and the swampland scam started back up again with forceful telemarketers and predatory sales tactics including low buy-in prices and monthly payment options. Essentially, the fraudsters would try to sell as much as they could as fast as they could before declaring bankruptcy. They targeted new cities like Cape Coral, Daytona and Polk County. These criminals were simply selling at a rapid fire pace while never filing the paperwork or pulling permits for roads and utilities. Once the developers declared bankruptcy, the unsuspecting buyers had limited to no recourse other than reselling their land purchase, which had become undervalued with the realization that it could not easily be developed. Some of the same areas that were peddled in the 1960s are still being sold today with a promise of becoming amazing (and lucrative).

In the past, fraudsters would actually have to swindle face-to-face. They would have to look unsuspecting people in their eyes and convince them to give away their hard-earned money. Now the internet allows for faceless transactions. Land can be sold through Ebay. Digital fraud is the easiest to commit and requires limited effort on the part of the fraudster. Many of these crimes are protected by the “Buyer Beware” philosophy but criminals have learned to target specific communities. They prey upon recent immigrants. People who have dreamed of the American Dream along with land and homeownership. They are promised a future and opportunity. What they receive in the end is undevelopable land that can never serve as a homestead.

The only way to protect yourself from these predators is to become informed. Don’t jump right into investing in land before knowing the basics. If someone is trying that hard to sell you on something, you should ask yourself why you have been targeted. Most things of great value to be sold don’t have to convince buyers with a song, dance and free buffet. Ensuring there is no title fraud is extremely important. When making a purchase, the buyer needs to ensure the property is being purchased from the rightful seller. That’s where a title company is key to helping protect the buyer’s interest. The title company will complete a thorough title search to identify the correct seller.

Things to Know Before You Buy